If you love espresso but have a tough time with the bold and bitter flavor of a straight shot then a Cortado may be the perfect drink for your palate.

But, what makes a it different from any other coffee-and-milk drink?

The answer has everything to do with the coffee-to-milk ratio, the texture of the milk, and the order in which they’re mixed. As it turns out, the definition of a “Cortado” is rather strict.

As a self-proclaimed “Cortado-nista” (did I just invent that? maybe), I just had to learn how to make this drink at home. And it’s not as difficult as you might expect.

Let’s take a look at what makes a Cortado, how it came to be, and how you can create your own..

What Is A Cortado Coffee?

So what is a cortado? A Cortado is a 4 oz espresso coffee drink made up of equal parts espresso and milk. The milk is steamed to a silky texture and then poured over a double shot of espresso.

The order of operations is important for these drinks. Espresso first, then the milk.

Unlike other espresso coffee drinks, there are no size options with a Cortado. Cortado’s always delivered as a 4 oz beverage.

In Spanish, the name “Cortado” translates to “cut,” in reference to how the acidity of the espresso is cut by an equal amount of milk. Unlike a cappuccino and many other Italian coffee drinks, the milk in a Cortado has a smooth silky consistency instead of a bubbly, frothy foam.

History Of The Cortado Coffee

Many believe that the first public reference to this drink can be found in a Barcelona coffee shop manual from 1926. The text refers to “cafe Cortado” or “cut coffee.”

The common name “Cortado” didn’t appear elsewhere until the 1930s in Cuba, where a similar “cortadito” popped up using sweetened condensed milk and espresso. This Cuban version is the only take on a Cortado I’m aware of that uses sugar in the mix. It offered a sweeter, stronger option to local coffee at the time.

While there are other similar and inspired drinks, the strict definition of how a Cortado is made hasn’t changed over the last century. If you walk into a coffee shop and order a Cortado, you’ll get the same espresso drink as you would have 90 years ago.

The difference is that this drink has become mainstream. You no longer have to trek to an authentic Spanish or Cuban coffee shop to enjoy one. Now, any barista worth their salt can make one up quickly. Or you can make one at home.

How To Make A Cortado

Follow this recipe to make your own cortados at home! You will need an espresso machine or a way to make espresso with this coffee drink.

Step One: Prepare Your Espresso and Milk

First, gather your glass, set up your espresso machine to pull a double-shot of espresso, and measure out 4 ounces of milk to steam.

Since this is such a small drink, you’ll want to assemble and drink it immediately. Otherwise, it’ll cool down before you can enjoy it.

I advise steaming 4 ounces of milk, even though you’re only going to use 2 ounces per drink. Trying to steam only 2 ounces at a time is difficult and can quickly lead to scorched or overly aerated milk. So take this as an opportunity to make two beverages and share one with a friend!

The easiest milk to use to make the perfect drink is 2%. You’ll still enjoy a rich and creamy flavor without foaming the milk fat past the desired texture.

Using the steam wand on your espresso machine, place the wand at the bottom of the pitcher and turn it on. Guide the tip of the wand to just under the surface of the milk and steam until the milk is thoroughly heated but not yet foamy.

Pull your double shot of espresso into your 4 ounce glass. It should fill the glass halfway. Then, it’s simple to fill the glass the rest of the way with the silky, steamed milk and get a perfectly proportioned Cortado every time.

Now, enjoy your smooth and balanced Cortado before it cools!

Differences Between Cortado vs Latte

The biggest differences between a Cortado and a Latte are the proportion and texture of the steamed milk.

Sounds complicated, right? You’ll get the hang of it quickly.

For a Cortado, we’re looking for the milk to achieve a silky, satiny texture. Using lower-fat milk (2% or skim) can help achieve this result.

With a Latte, it’s important for the milk to reach a foamy consistency. Reach for the full-fat milk to create a better and more stable foam.

Put these drinks side-by-side, and it’s easy to spot the difference in texture.

There is also a lot of variance in what qualifies as a Latte, whereas a Cortado will always be 2 oz of espresso topped by 2 oz of steamed milk.

Depending on where you sip, the barista may add an extra shot of espresso to your Latte drink and scale up (or down) the amount of milk as they see fit.

Lattes can also be served hot or iced and are sometimes paired with a sweetener like chocolate sauce, caramel, or peppermint syrup. A Cortado should never involve flavor inclusions, and relies singularly on the bold flavor of the coffee.

In many regards, a Cortado is more similar to a Flat White than a Latte.

What is the difference between a Flat White and a Cortado?

Although a Cortado and Flat White might seem similar at first, they’re set apart by the order in which they’re poured into the serving cup. A Cortado is a double-shot of espresso topped with an equal amount of steamed milk. In contrast, a flat white is steamed milk topped with espresso and can be made in differing sizes.

Is a Cortado stronger than Cappuccino?

If you compare a Cortado to a Cappuccino ounce for ounce, the Cortado is the more potent drink. While a cappuccino is larger, a Cortado has a higher ratio of espresso to milk

What is a large Cortado called?

Since Cortados only come in one size (4 ounces), you’re better off ordering a Flat White, which can come in larger sizes. If you want the espresso to be added first and then topped with the milk, order your Flat White “upside down.”

And there you have it! After reading our article, we hope you know exactly what a cortado is, how to make it and the difference between a latte as well a few other drinks.

The next time you find yourself at Starbucks or your local coffee shop wanting to order a new espresso drink, you’ll have another option other than the traditional latte to try out and know what you’re going to get.

Want to learn about the difference between cortado and other coffees? Check out these!

Want to learn about other espresso drinks? Head to one of these! 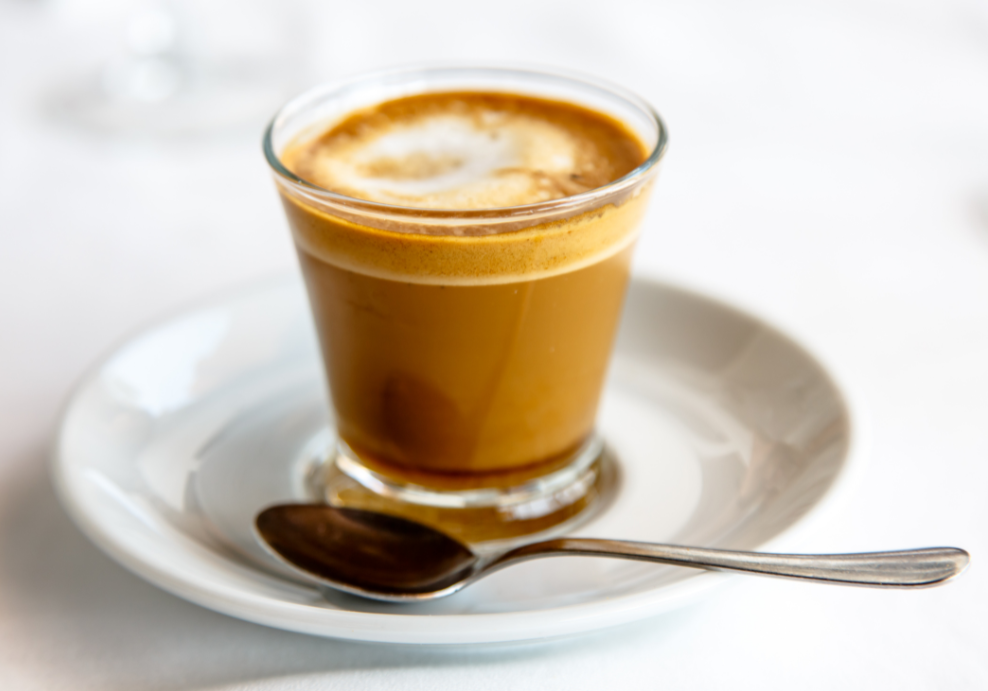 Jasmine Mattey is a coffee lover, bookworm, and regular contributor at Bit of Cream. As a child she dreamed of opening a coffee shop, but today she'd prefer to sip coffee rather than sell it. Jasmine graduated top of her class at culinary school. When she isn't curled up with a cup of coffee and a good book, you'll find her cooking, baking and writing about her culinary adventures at Kitchen Ambition .

Hi! We're Jen and Rishi. Two parents who love coffee but don't take it too seriously. Join us as we discover the best coffee, coffee makers and more!

We are a participant in the Amazon Services LLC Associates Program, an affiliate advertising program designed to provide a means for sites to earn advertising fees by advertising and linking to Amazon.com. As an Amazon Associate we earn from qualifying purchases.

Find My Other Blogs!